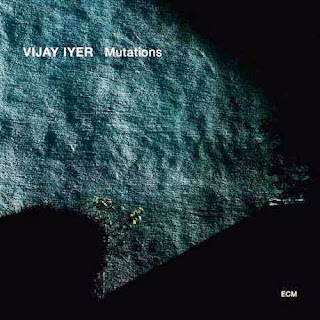 Vijay Iyer is a jazz pianist-composer who has been making waves with his music in recent years. Yet his debut solo album for ECM, Mutations (ECM B0020038-02), brings you a side of his music that differs from what he has given us in various ensemble performances on disk previously. There are three freely articulated but compositionally explicit solo improvisations, sometimes with electronic accompaniment, and they are within the realm of what we might have expected from him as a pianist. They are very good and add to our appreciation of his own musical ways.

But then in the center of it all is a long composition for piano and electronics (realized by Maestro Iyer) and string quartet. "Mutations I-X" has as the title implies ten movements that have a minimalist thrust to them and serve to realize a kind of grand mutation of change within continuity.

The works goes from placidity to energetic cyclic repetition and beyond to more complex line-weaving. It is fascinating and rewarding to hear; it is both inventive and immediate in its visceral appeal. The string writing has nice contrapuntal interplay and drive at times. At other times it is expressively agitated and modernly "out". The piano joins in at section III and a more complicated series of phrase structures enters into play with rhythmic vigor.

It goes on from there in ways that sustain interest and show Iyer as one who does not want to stay in a single all-defining artistic category. He succeeds in making music you did not know was in him, yet sounds completely natural and inspired.

What is jazz should not be the question that this music brings up. Rather it seems Iyer wants to make music-making itself the thrust of what he does. What you call it means little to the music and the process of realization. So you might not expect this from a "jazz musician", but really that isn't what matters. Does it work as music? Yes! It is a fascinating and captivating album that shows you Iyer cannot be pinned down.

It presages well for future Vijay Iyer endeavors. And it stands on its own as a very satisfying artistic statement. So listen!!