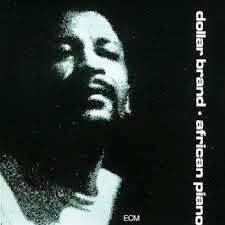 ECM had a good idea of re-releasing some of the gems in its back catalog that have been hard to find in recent years. Each release can be had as a deluxe vinyl LP or regular CD. The beautiful album African Piano (ECM JAPO 60002 3743552) by Abdullah Ibrahim is one of them. It is a 1969 live performance at Jazzhus Montmartre, Copenhagen. And it is an album that lays out the artistry of the master South African player-composer in all its glory.

If you don't think Ibrahim was a seminal force in the music from then on, listen closely to this recording. He gives us the rooty-yet-advanced style that impacted the scene in full-blown form. As much as Horace Silver and the initial "funk" movement allowed the music to re-embrace its down-home gospel and blues roots, Abdullah Ibrahim did something analogous with his re-routing of those roots into the African center of its initial existence.

So we get a full set of some of his trademark sounds in the pure setting of a solo piano performance. The in-and-out of his expression blended naturally together, just as Duke Ellington's piano style did beginning in an earlier era.

And like Duke, Abdullah sounds as timeless as ever here.

This is indispensable music, played definitively. If you don't have it, you should. I am glad I do.