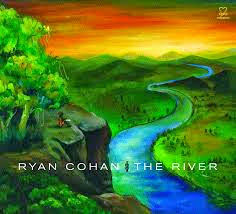 Pianist-composer Ryan Cohan did a tour of Africa a while back. The experience led him to compose a 14-movement suite that captured his feelings and impressions. The result is The River (MTM 123) a rather compelling jazz composition for his septet.

There are some understandable rooted strands of Randy Weston and Abdullah Ibrahim to be detected here in terms of forebears as well as a general African orientation in the rhythmic vitality, call-and-response motifs and such. But it is not just a kind of pastiche. There is more to it. It stands on its own.

The band has the rhythmic charge that's needed. They play the written parts nicely and solo overtop with good sounds. Ryan's piano playing is very much a force in all of this. He sounds motivated and motored with a positive charge that gets the drive in gear. And he puts in a great performance, I would say. In addition to Ryan there are two reeds, trumpet, acoustic bass, drums and percussion. I am not familiar with the other players but they do sound very good.

This is one of the better jazz-compositional suites I've heard in the impressions-of-Africa mode. It makes me want to hear more of Ryan Cohan and it also stands well on its own feet.

The River comes across as hip, sophisticated, burnished fire. I am impressed.