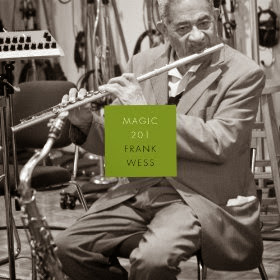 Tenor sax and flautist Frank Wess defied nature by living to a ripe age while still managing to sound great. Like all such things though it could not last forever. And so he passed last year. Fortunately what were I presume his last recording sessions produced a wealth of material. We covered his Magic 101 album here on its release. (See the June 20th, 2013 article). Now we have Magic 201 (IPO 1025).

As before there is the sympathetic piano of Kenny Barron and the tasteful drumming of Winard Harper. On this session Rufus Reid takes the bass slot and added is guitarist Russell Malone. These are the right folks for Frank and he responds in kind.

Wess was always key, especially when with Basie, as a swing-to-bop stylist that was comfortable in either camp. These later sessions bring that home to us forcefully, and in addition remind us of his lyrical side. Listen to the solo flute version of "The Summer Knows" and you hear that. But the blues and standards recorded here also remind us of the beautiful tenor tone he had. Perhaps no living artist except Scott Hamilton remains to channel the sound, and not in quite the same way.

It's primo late Frank, which means nothing in the way of 16th-note runs (not that he did very much of that even in his youth), but just a perfect, direct, unfaltering blowing-at-you classicism.

Goodbye Frank Wess. And thanks. From all of us.