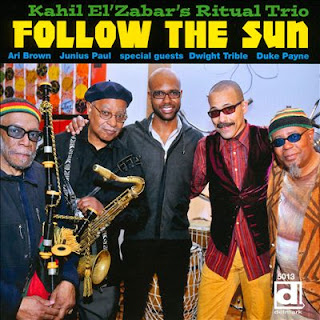 When somebody like Kahil el'Zabar releases his umpteenth album, it's for good reason. Part of that is his vision of a music that is contemporary, has Afro roots and insists on hitting grooves while having cutting-edge modernity.

You can hear that clearly and nicely on the Kahil el'Zabar's Ritual Trio offering Follow the Sun (Delmark 5013). The trio itself is an excellent one, with Kahil playing fire-y drum set and hand drums plus his exhortation vocals, Ari Brown a potent double threat on tenor and post-Tyner piano, and the roots-and-soul hard hitting bass of Junius Paul. For this album they are given some very hip impetus with the addition of guests: Dwight Trible on vocals, a singer who phrases and refigures phrases like a real jazzman. Then Duke Payne comes forward as a second tenor with a good feel and compatibility with Ari, and also some bagpipes.

As with Chicago's best musical minds and souls over time, it's equally a matter of how and well as what. That means there's an Afro component here that grooves everything but there's also a Trane-Pharoah rooted swinging exuberance that makes it about immediacy and spiritual depth.

So we get some very nice versions of standards like "Body and Soul" and "Softly as in a Morning Sunrise" but also Shorter's "Footprints". And there are a bunch of nice originals.

The album goes from strength-to-strength. This is good music. Excellent music. There's no flagging and it keeps on sounding better. Give it a spin by all means!