Nate Wooley Sextet, (Sit In) The Throne of Friendship 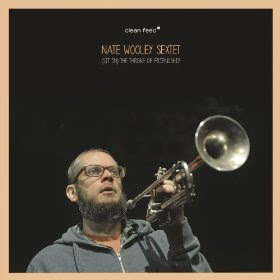 Nate Wooley doesn't try to grandstand you with his playing. His objective I think is to play exactly the right notes with the right spin for each number, each project. And with his own projects you get the idea that he thought pretty carefully about exactly who would be playing the music and so the music-player nexus generally has a tightness to it conceptually, though there may be and generally are free expressions inside it all.

That feeling is strong with me as I listen to his Sextet play the music on (Sit In) The Throne of Friendship (Clean Feed 280). Like a modern-day Gigi Gryce, sure his playing is excellent, but the thing is the music impression-expression of the modern day. You can hear maybe a little Fats Navarro, Bill Dixon or Don Cherry inside his tones, but it all comes together as free-composed and right now. Who says the free-avant has no sense of tradition? It is there, one way or another, if you listen for it.

But the point is not that there is no such thing as complete deja not, there is no total tabula-rasa improvising going on now. Everything is a product of the sum total of the before and if it's good it is the special something that makes it alive right now.

You hear that in the best way on this sextet set. It's a singularly hip band of Nate of course on trumpet, Josh Sinton on bass clarinet and baritone sax, Dan Peck on tuba, Matt Moran on vibes, Eivind Opsvik on contrabass, and Harris Eisenstadt on the drums. These are colorist players and their instruments in tandem give that color a blend that Nate takes advantage of with compositions that sit well with this particular group.

Built-in to the charts is an ultra-modern outlook and plenty of room for free and tied utterances. The two blend together in ways that are especially good. Music such as this in Gigi Gryce's day would generally make a pretty sharp distinction between the charts and the blowing. It's a testament to Wooley, the band, and the progression of the music that a talented group of cats like these can blow these charts so that improv and composition fit together as one thing.

And each of these players stand out here as both up for it and right for it. Listen to "Executive Suites", for example, and the transition from the charted to the simultaneous duo solos of Nate and Josh on bass clarinet. There's a point where it's blowing and there's a point where it's charted and that it is seamless but also very musically continuous is a very cool thing.

So I don't suppose that you will be surprised that I find this one on my very recommended list. There is no one way to go about the "new jazz" today. This is one way and it works very well. Excellent, Nate Wooley!