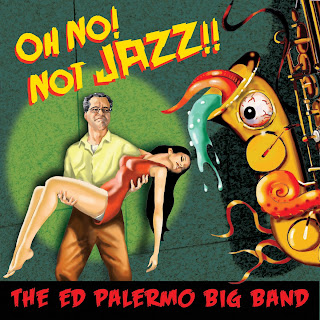 When people keep on playing the music in various guises long after a musician is no longer on earth, it is sign of his or her lasting importance. (Though I would be hesitant to say that of Elvis.) And so with Frank Zappa we continue to see and hear various renditions from bands both wholly or partly dedicated to his compositions.

One of the most active and best is the Ed Palermo Big Band, who by now have amassed, so I read, more than 900 Zappa charts as re-arranged by their leader.

I was there at the beginning, though very young. I bought Freak Out within a week of its release, not having any idea what it contained but intrigued because "it looked weird" and that was enough for me. As the years followed I followed what Frank was up to and by the time Uncle Meat came out was convinced that at least some of this was the music of the future, as it indeed was. Nobody did more to further the combination of jazz, rock, and even avant-garde classical and he paved the way for all kinds of developments, some better than others. Yet it is the inimitable quality of his music as well as its daring that stands out for us now.

So Ed Palermo and his big band have been a critical part of helping to revive and keep alive Zappa's music via Ed's very sympathetic and hip re-arrangements of Zappa music and the fine ensemble that grew around the fine idea.

There have been a number of albums out by Ed and the band to this end. Now he returns with something a little different. Oh, No! Not Jazz!! (Cuneiform Rune 380/81) has two CDs, one another excellent collection of Zappa big band rearrangements, the other a full disk of Palermo's own compositions.

The Palermo-composed disk contains some very solid mainstream big band charts. They do not sound Zappa-esque so much as they reflect Palermo's fine sense of part writing for the big band. They are quite enjoyable but I would not put them in the category of landmarks. They are nice and deserve multiple listens.

The Zappa disk on the other hand does seem essential. The reason I say that--the compositions are some of Frank's very best, pieces that give you Frank's melodic genius, the daring and the (for then) very complicated yet directly communicative sounds. It is a veritable best of--or surely at least some of the best of--Frank's jazz-rock works: "Inca Roads", "The Uncle Meat Variations", "Little Umbrellas", the "Dog Breath Variations", the Theme from "Lumpy Gravy" and the "Black Page #2". Then there is a hilarious Sinatra-like Las Vegas sleaze version of "America Drinks and Goes Home".

The re-arrangements are marvelous, the band tight as a drum, and they are peppered through with effective solos, though that latter isn't the main thrust.

So while Ed's compositions are nice to hear and have, the Zappa disk is essential listening if you don't know why Zappa is musically important.

It's mostly Zappa in early flower, when nobody came close to blazing the paths as he did. Even confirmed Zappa-holics will dig this for the nicely differing flourish it puts on the music, updating sometimes but weaving the strands mostly into a similar yet different cloth.