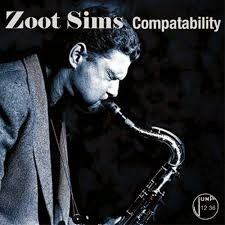 First, a confession. For various reasons when I first started seriously listening to jazz I deliberately avoided what was called the "cool school" in jazz and generally the white cats who played it. I read all the various diatribes against the music and took it to heart. Then I listened closely to Miles Davis and his Birth of the Cool sessions. The music moved me very much. Next thing you know I was listening to some of the cool jazz that came after and found I liked much of it.

Now Zoot Sims was never really quite the cool school tenorist, but he was lumped in for various reasons--especially because some of his associations were in the cool zone. It took me a little while but eventually I got to hear Zoot with Al Cohn and with other cats. These many years later I am a confirmed Zootaholic. I don't believe he ever made a bad record, though naturally some are better than others. But Zoot had something and it was just about always with him throughout his long career.

So when Delmark sent me their reissue of Compatability (Jump-Delmark 12 36), a 1955 session for the long defunct Jump label, I took notice.

The album was originally released as a 10-inch LP back then. Sometime in the '70s it apparently came out on a 12-incher with alternate takes. The CD issue we have before us includes 13 cuts with the various alternate takes and we can assume that's the full date.

It was originally put out under the leadership of trumpeter Hall Daniels, who arranged the originals and standards for octet as influenced by the Birth of the Cool contrapuntal style that was quite the thing at the time. The arrangements are good, Hall sounds fine, but Zoot Sims and baritonist Bob Cooper stand out as the best soloists here.

It may not be Zoot's greatest outing but he sounds good and everybody swings along nicely. If you are a Zoot fan you'll eat it up. If not it may not be indispensible. But it's very nice regardless.