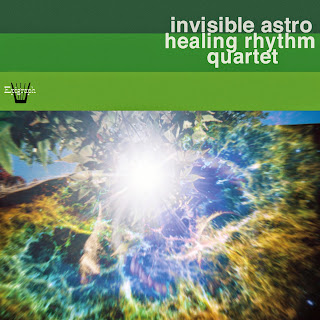 Ignore the West Coast musically these days at your own peril. It may have an underground feel to the scene, but then so does Brooklyn and Chicago, Lisbon and London. Much good-to-excellent music is being made in the world as we speak, and much of it gets little-to-no attention in the mass consumption sense. We shouldn't expect it to be different right now. Some future world may see things in another light, but for now the mass of mass consumption is generally looked down upon and given its directives from on high culturally.

So if you don't like that, switch it off. There's plenty of alternative music still out there, flourishing. Such an example is the Invisible Astro Healing Rhythm Quartet and their vinyl LP on Epigraph (LP-002).

It's a West Coast outfit that starts where Miles Davis's last cohesive psychedelic band (the one with Pete Cosey) left off. It thrives on driving a riff out of the planet and into the heavens. These are Earthlings though so we should talk about the who before we get far into the what. It's a live quartet date supplemented by the addition of two horns. The regular quartet consists of Jordan Aguirre on electric guitar and organ, Andrew Koeth, electric bass and organ, Brenndan Morlan on electric guitar and electric bass, and Alex Sarad on drums. The horns are well-represented by Kris Tiner on trumpet and Phillip Greenlief on tenor.

I implied earlier this starts with the space-funk of '70s Miles. It does. But it also has both a Sun Ra sort of space ethnicity and sometimes a bit of Ethiopian funk tonality.

Now the band itself doesn't stand out for its solo work though there is some and it is not uninteresting. They lay down the riffs effectively and get space colors to go with it. The horns have parts to play that add to it all but also are the soloists that most get that part of things going.

The live ambiance adds to the total sound, as does the warmth of the analog LP.

Now this is not going to overturn the universe and it is not meant to do so. It is some infectious groove and space mongering and for that it gets to you after a while.

Maybe not indispensable, but very cool to have and hear!

Posted by Grego Applegate Edwards at 6:56 AM