The Swingle Singers, Weather to Fly 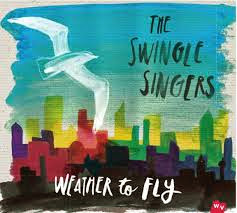 Some groups manage to create music of substance over long periods of time. The vocal unit Swingle Singers first came to the world's attention in the '60s with their patent wordless, swinging versions of baroque classics. That music struck a nerve so much that you heard them virtually everywhere for a time and justifiably so. I believe they garnered five Grammys in that period.

The next recorded performance I heard personally was as a central part of Luciano Berio's Sinfonia. And that was a sign that they could move in many different directions as they saw fit.

They've been together more or less continuously (with a hiatus in the '70s) since 1962. The original members may no longer be with us or have gone on to other things, but the contemporary version of the group shows the same excellence of arrangement and ability, as witnessed by their latest album Weather to Fly (Village Jazz).

The album is a greatly diverse potpourri of contemporary song and shows off the beautiful sound of their voices in tandem and individually. I was surprised to hear them do Chick Corea's well-known "Spain" in a way that refurbished the song in my head and made me appreciate it all over again. The album has much going for it, one thing being unpredictability. This is not cutting-edge or avant but it is excellent in its very own fashion and covers much ground.

I was surprised, in a way, to find that the album is in every way ravishing. It is what it is, but if you like beautiful vocal arrangements well executed you are likely to get with this in a big way. May they continue another 100 years! Recommended.