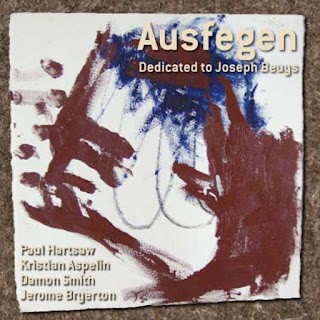 Just because a release has been out a few years doesn't disqualify it for a review, if it is worthwhile. That's true of Ausfegen (BPA 012). It is a 2006 date of avant new music free jazz dedicated to abstract conceptual artist Joseph Beuys. The title refers to the performance art piece by that name where Beuys swept Karl-Marx-Platz in Berlin with a broom in 1972.

In many ways the music here represents a sort of "clearing" as well. It is a quartet of musicians dedicated to improvisations of the avant variety, as much influenced by "new music classical" as it is by "free jazz."

In the mix are musicians both familiar and unfamiliar to me. Paul Hartsaw is on tenor and soprano saxes--and I have reviewed a good number of his recordings here (type his name in the search box). Damon Smith plays contrabasses (two simultaneously for "Broom with Red Bristles"). He is now well-known to me thanks to his sending a batch of his recordings recently, of which this album is a part. Kristian Aspelin is on guitar (and broom activated guitar on the cut mentioned). Jerome Bryerton is on percussion.

We have eight collective improvisations in the set. All are uncompromising in their dedication to the abstract realms of expression, splattered and scattered timbral events that follow in the path of such pioneering ensembles as the Spontaneous Music Ensemble, MEV, AMM, etc. That means a striving for a four-part group sound composed via the counterpoint-pointillism of a four-in-one totality. No one is soloing. Everyone is soloing. The distinction loses meaning in the four-part melange.

Each player brings a special instrumental approach to bear on the whole. And each is finely attuned to the others so that a totality emerges over time for each segment.

This is an excellent example of the new music side of contemporary avant improv. It remains always at the farther edge of tone and in the center of timbre. So of course a listener not used to such playing must adjust to the sound events and suppress expectations of conventional melody, pulse and form that one would ordinarily hear in less avant contexts.

In the end the question becomes, "does this ensemble express new sonances with an expressive cohesiveness, a sense of goal-orientation and sheer viscerality?" That's one question this sort of music raises, anyway. The answer is yes, most definitely. And so I do recommend this one for you for its thoroughgoing exploratory mode and its success at creating the new sounds now available to us, as listeners, as players, as humans in the post-before world. Check this one out.