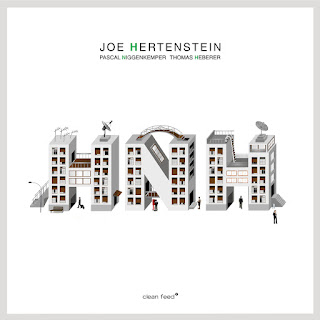 HNH (Clean Feed 332) is the potent trio of Joe Hertenstein on drums and compositions, Pascal Niggenkemper on contrabass and Thomas Heberer on cornet and compositions. There are four works by Joe, four by Thomas, and four collective improvisations. There was a first album on Clean Feed a while ago. I have not heard that one as yet but I plan to. This HNH is a follow-up.

Clifford Allen wrote the liner notes for this album. He pretty much says it all about the history and objectives of the trio in its lifetime from 2007 to where it is now. I suggest you read that. For this posting I come forward to give you my impressions after a careful listening to the music.

Joe Herstenstein's drumming impressed me on the recently covered Blaise Siwula album and also as a member of the Curators a while back. You can look up the reviews in the search box above if you are curious.

This second volume of HNH, as most readers would expect, covers the latest interactions between the three, who since their arrival in New York from Germany have made a definite reputation as avant-free players of distinction.

The album nicely covers free and pulsating, composed and improvised, solo and collective inspirations with contrasting segments/numbers. Joe Hertenstein once again impresses me as a very musical drummer with the sort of conversational line improvisations of timbre and periodicity that are rarely encountered except among the best of the free percussionists. In this spacious trio setting his playing is very much the equal voice in the three-way dialogues at hand.

Pascal Niggenkemper is a bassist of finesse and thoughtful invention. He fills his space with the kind of bowed and pizzed richness that helps very much to make the totality of the music something special. And his wide spectrum of extended techniques makes him essential to the sound-design of the trio.

Thomas Heberer has become an in-demand cornetist on sessions and gigs these days. To hear what he does on this second HNH is to give you some very bright moments and a key to the way he channels avant and jazz tradition into his own original stream of development. He can line with a careful free lyricism or a soulful bursting forward depending on the work at hand and the implications of the dialogue of the moment. Muted, pure or burred, he is the master of control and expressivity.

The music in the end is tightly focused, free yet considered, exemplary of the art of avant improv today. Hertenstein, Niggenkemper and Heberer are making music of real importance, music gratifying to hear, exciting to experience, filled with singular artistry.

These are three of the best and their confluence is nothing short of auspicious on this set. Get to this one if you can. It's very worth your time!