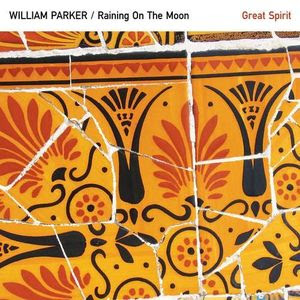 The music of Great Spirit (AUM Fidelity 098) was recorded in 2007 (except for one song, recorded in 2012) by William Parker and the Raining on the Moon ensemble at the same time as the music of the earlier album Corn Meal Dance. I have yet to hear that one but this companion volume has a completeness and togetherness so that one feels no lack whatsoever.

It is a perfect congress of songs, vocals and instrumental brightness. Leena Conquest does the vocals and she sounds wonderful, soulful and swinging, committed and just right for the song lines. William Parker is on bass of course and sounds as ever busily foundational, a titan, a force on the contrabass in the ranks of the very best. Hamid Drake, as you can imagine, locks in with William to make a formidable tandem that moves the music into that undescribable nether zone where the music not only swings but also torques forward springingly.

Rob Brown on alto, Lewis Barnes, trumpet, and Eri Yamamoto on piano drive into the great spirit of the music with real musicality and soul. They accompany and solo exceptionally well.

And the songs, the songs, they have great memorability, depth and a lyric-poetic directness. It is about the pain, resolve and spirit-ecstasy of being black in an America that is ever-changing yet at times tragically never-changing.

It is all very beautiful, a monumental set for all involved. Surely this is some of the best vocal-song oriented jazz sets I have heard since the Millennium. It is superb.