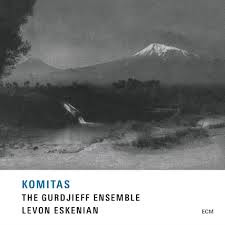 The Gurdjeiff Ensemble of folk instruments under Levon Eskenian received a good deal of acclaim back in 2012 with their ECM release Music of G. I. Gurdjieff. They return with Komitas (ECM 2451), an album of "ethnographically authentic" versions of the music of Komitas Vardapet (1869-1935), considered a father figure of contemporary Armenian music.

The instrumentation of the ensemble is very much indigenous to traditional Armenia and its surrounds, with santur, folk oboe, oud, and such.

Komitas's music is very much appropriate for the treatment, as well as being ravishingly beautiful in itself. We get 18 brief pieces, played with care, zeal and striking sonance.

This is essential for its arrangements and its core Komitas repertoire. It is a must for those who love things Armenian and those who would in any case welcome a musical adventure of lasting value.

Highest recommendations for this one!

Posted by Grego Applegate Edwards at 5:31 AM