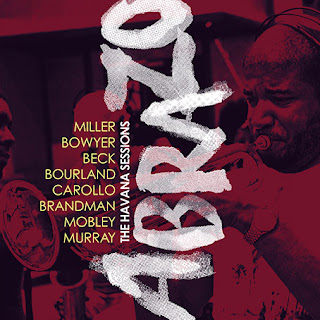 The historic easing of political tensions between the United States and Cuba in recent years, notably the end of trade and travel embargoes, no doubt will lead to a renewed level of exchange on cultural fronts. And indeed, we see an immediate, exciting result in the new 2-CD set Abrazo, The Havana Sessions (Ansonica AR0001).

It is the result of a trip carefully planned by the Parma Records group to Havana. With them came compositions and musical artists, who teamed up with some fine Cuban musicians and arrangers (notably Juan Manuel Ceruto) to create what one hopes is but the first in a long ongoing series of exchanges. With it all is the birth of a new label, Ansonica.

The first disk concentrates on some nicely written, nicely played Afro-Cuban jazz, written by Timothy Lee Miller, Don Bowyer, Bunny Beck, and fine arrangements by Juan Manuel Ceruto. This is cutting edge Latin Jazz and exciting to hear at that.

The second volume interjects modern classical elements in a series of vocal and instrumental compositions where the Cuban "tinge" is ever-present to greater or lesser degrees and performances are at a very high level. Roger Bourland, John A. Carollo (whose music we have covered and appreciated via a number of recordings on the Gapplegate Classical-Modern Review Blog), Margaret Brandman, Mel Mobley and Michael Murray provide the works. The music is invariably worthwhile and points to even more ambitious further possibilities.

And so we have in a first installment a Cuban-US collaboration that shows great promise as it also realizes it in an inaugurational offering. I highly recommend this one for numerous reasons. Most of all it is an undiluted musical pleasure! Hear, hear!
Posted by Grego Applegate Edwards at 6:12 AM