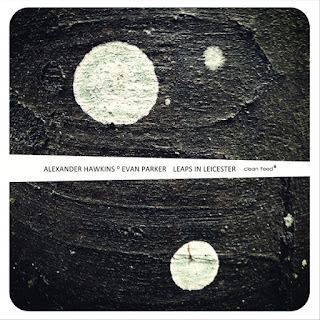 As the title suggests, this is a recording made in Leicester, UK, notably at Embrace Arts last year. A constant is Evan's appearance on tenor, which to me lately is the most satisfying Parker instrument. The two explore the spontaneous freedom of possibilities on four extended segments. And they discover a noteful common ground that thrives on the creation of simultaneous outside stream torrents that match invention with invention. Both "breathe" as one; Alexander often synchronizes brief pauses with Evan as breath-long intermittent strings.

But then there are sound color interludes with breathy expulsions and inside-the-piano complements. And the energy level rises at times to the near-explosive, as one might expect. On the whole the emphasis is more on the search for open simultaneous sounds of a creative sort than on the expression of pure energy, though there is at no time a flagging of inspiration or thrust.

Alexander Hawkins shows himself throughout a stylist of the outer realms of piano who can keep up with Evan and parallel Parker's stylistic free purity of expression with effective phrase ideas of his own. Parker is in fine form on tenor and so all is right in the world for this program.

Those who are not so familiar with Hawkins get a good idea of his open form inventiveness and the two together create spontaneous structures to edge the music forward in exhilarating ways.

Nothing is lacking. All is inspired. Recommended highly for sound adventurers! A model of excellent free sojourns.
Posted by Grego Applegate Edwards at 6:22 AM