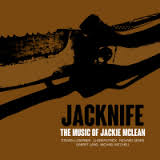 Jackie McLean graced the jazz world with his own searing take on bop-and-after jazz for many years, then left us, and so we remain with a body of great recordings and a feeling that one of the truly great ones has gone and cannot be replaced.

On the other hand we have altoist Steve Lugerner and band to pay homage to Jackie on the recent Jacknife, The Music of Jackie McLean (Primary Records). And it turns out that is a very good thing. No, of course Jackie is not in the mix, but the spirit of his music lives on in this selection of six numbers written or indelibly associated with him. Three by McLean ("Das Dat," "Melody for Melonae" and "Hip Strut"), two by Charles Tolliver ("On the Nile" and "Cancellation") and one by Jack DeJohnette ("Climax") bring us back to some of those great sides, and the quintet of Lugerner, JJ Kirkpatrick on trumpet, Richard Sears on piano, Garret Lang on bass and Michael Mitchell on drums straddle the hard bop and outer with some fine performances.

We've covered Steve before, notably his notable "For We Have Heard" album on September 12, 2013. Once again Lugerner certainly is the man with some very groovy alto that channels Jackie but brings something fine on top of that. Everybody has the spirit feel, though, so after a few minutes you adjust to the newness in the tribute and dig into the good modern jazz that comes out of this disk.

Oh, yeah, this is good. I am glad to put it on and I think you will be, too.
Posted by Grego Applegate Edwards at 7:24 AM