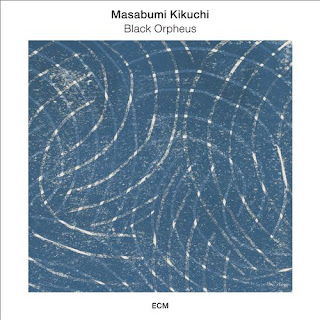 Masabumi Kikuchi's posthumous release of a solo piano concert in Tokyo, Black Orpheus (ECM 2459) is in many ways a thing of wonder. It takes a long meandering, brilliantly wandering route through his own inimitable thickets to the song "Black Orpheus" and follows up with a short and very poignant version of his "Little Abi."

This recording is a culmination of his life (1939-2015) in music, one might say. It is fabulously immediate, expressive in volcanic waves of feeling, tonality and chromaticism. There is a deep involvement in swirling lines that go beyond the jazz vocabulary into a personal one.

His long association with Paul Motion ended with the great drummer's death and according to the liners to this album, he fell into a period where he felt cast adrift. But by the time he returned to Tokyo for this triumphant recital, his creative abilities were at a new peak, aside from whether he was satisfied with the existence left to him.

Ultimately that concert was pure revelation. And we have it here as glorious sound in all its exceptionality. Personally, the music stuns me with its searching perfection. This is solo piano improvisation at its highest peak. Brilliant. You must hear this.
Posted by Grego Applegate Edwards at 6:27 AM