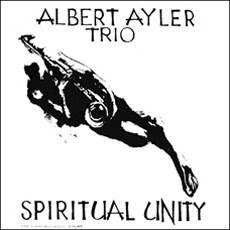 Certainly Albert Ayler's Spiritual Unity (ESP) was one of the latter. When it came out in 1965 it supplied a vocabulary for the budding free saxophonist and just as importantly presented a model for the free rhythm section that remains very much alive today.

ESP has reissued the album as a CD, as a download and as an audiophile quality collector's edition LP.

It's not just Albert Ayler's tenor work that was rather revolutionary at the time. Gary Peacock's bass and Sunny Murray's drums were equally so. Peacock acted with maximal freedom and true virtuosity yet his playing was a continual commentary on the implication of the simple folk-like quality of the head melodies as well as Ayler's freely articulated excursions into expressive tenor sounds. Much has been made of comparing what Ayler played and the Pentecostal practice of "speaking in tongues." I'm not about to question the aptness of that analogy. More to the point free music derived much from the freneticism of his playing on these sides.

Perhaps most importantly Ayler established a much wider palette of sounds the tenor sax could regularly call upon: the throaty growls. dynamic lower register overblowing, piercing upper register falsettos and much else. After this album and several key others that followed, the expanded sound resources suggested by Ayler's work were adapted by many that followed in his wake, from late Coltrane onwards.

Then there is drummer Sunny Murray. He virtually invented the freely out-of-time style of drumming that has remained a critical stylistic aspect of the modern player. And one can hear how well enmeshed Sunny was in this way of going about it early on. Listen to how he interacts with Ayler and Peacock on Spiritual Unity and you will hear a master already fully formed.

The general public still may find this music a little shocking, perhaps abrasive. Compared to Kenny G. that is certainly so. (And of course that should tell you something about Kenny G. more so than Albert Ayler.) It took many years for a Beethoven or a Berlioz to gain general acceptance in the late classical-early romantic era. And there are still untutored ears that may find that music a little too "heavy." So with Albert. He has an intensity that the listener needs to assimilate to appreciate his music.

Spiritual Unity is one of those records that belongs in the collection of anyone serious about the roots of the jazz of today. It's that important and it's that good.
Posted by Grego Applegate Edwards at 4:26 AM