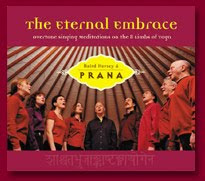 On these pages we've covered Baird Hersey's first overtone singing album Waking the Cobra (1999), and his collaboration with Krishna Das, Gathering in the Light (2007). Today we backtrack a bit and look at his first album (2004) with the vocal group Prana, The Eternal Embrace (Hersey Music).

Prana is an acapella vocal ensemble devoted to Baird's ethereal music. The Eternal Embrace takes as its starting point a series of meditations on the eight limbs of yoga, as set forth in ancient times by Yoga Master Patanjali in his Yoga Sutras. Now I do not know enough about yoga to comment of the relationship of the music to the text, except to say that the goal of Yoga as set forth in the precepts, viz "the stillness of the mind," seems to be mirrored in microcosm in the music presented here.

As with Baird's musical practices in the earlier Waking the Cobra, drones, long sustained chords, exceptional overtone singing and an overall feeling of stillness and quiet (NOT stagnancy) pervade the tone of the music. Influences include Buddhist chant, especially from Tibet, post-modern concert music, and a general South Asian influence. There is an organic relation of the music and the human aspiration through the breath. This is music that breathes deeply and profoundly.

The Eternal Embrace is another exceptional effort, moving to hear, and shows Prana to be a remarkably able body of singers, eminently suited to realize Baird Hersey's vision.

Highly recommended!
Posted by Grego Applegate Edwards at 4:58 AM