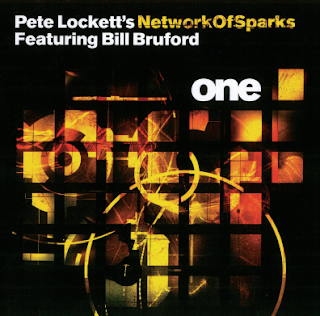 Ever since Mickey Hart and Zakir Hussain formed the Diga Rhythm Band for a short period of time in the early '70s, the nexus between progressive rock, various world musics and percussion rhythms and styles has been a very fertile one for creative music. Pete Lockett's Network of Sparks was in the front ranks of the very best of such projects.

Their excellent album One (Summerfold), recorded in 1999, has just been reissued. It features Bill Bruford and covers a wide spectrum of stylistic syntheses, from intricate drum set duets and minimalist-Gamelan influenced mallet/percussion grooves to Indian influenced cycles and other world traditions, all flavored strongly by the prog rock frame of mind.

Like the Diga Band, there are nicely worked out ensemble routines and a keen attention to the subtle combination of instruments and sound colors possible. This is percussion as art. It is very good to have One available again.
Posted by Grego Applegate Edwards at 4:55 AM