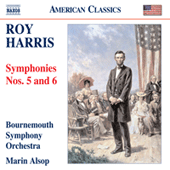 Naxos Records is in the process of releasing the complete cycle of symphonies by American composer Roy Harris. That can only be a good thing, especially if the present volume is any indication.

Harris's (1898-1979) reputation as an important composer in the modern post-Ivesian mode seems to have waned sometime in the late '50s, only to revive again in the past decade or so. Perhaps it was easy to take him for granted during a period where the very latest advancement of new music got fleeting, flavor-of-the-month attention at the expense of composers who weren't radically breaking with tradition but nonetheless created a body of works that had lasting value.

I do not wish to imply that there isn't much of lasting value in the more avant composers of that era, but that's another matter. Harris was certainly one of those in the less sensational, less "advanced" category, along with Piston, William Schumann and a handful of others. His World War II Era symphonies were more overtly nationalist, at least in sentiment, than some of the earlier and later works. In any event they remain excellent examples of the Harris style, long unwinding melodies changing hands among instrumental groups, crisp, clear orchestrations, a bracing, restrained lyricism. Listen to the sonorous, majestic, martial strains remembered in solitude as worked out in the Second Movement of his Fifth Symphony if you need convincing.

Marin Alsop and the Bournemouth Symphony give carefully but passionately rendered performances of these works. The added bonus of the miniature work "Acceleration," later reworked into the Sixth Symphony, gives a nice finishing touch to the presentation.

Highly recommended listening. . .
Posted by Grego Applegate Edwards at 4:53 AM