Toby Driver and His New Music 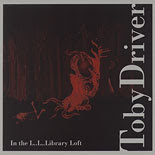 There are four pieces on the record, each a world of its own. Driver's hyper-electric ensemble guitar gives three of the four pieces some added metallic weight. Greg Massi is the guitarist on the fourth work. Every piece makes a convincing case for the viability of Toby's vision. Metal and new music can indeed be transformed into a powerful amalgam.

The instruments and participants for each work form a particular chamber/rock configuration. A series of moods and sound environments result. Some are soundscapes where atmospheric sounds conjoin with metal-derived musical washes; others are more hard-edged.

I don't know of anyone else creating music like this. And it's not just that Toby Driver dares to create such hybrids; he does so with absolute musicality. These are works to live within and grow into. They are so unique that a first hearing left me mystified. By the fifth hearing I began to appreciate concretely what was happening on this disk. I still need to listen another, say, five or six times to really get to grips with it. That is how unprecedented and unusual Driver's music seems to me. What could be more interesting?
Posted by Grego Applegate Edwards at 5:18 AM