Avram Fefer's Trio Blows Up A Storm on "Eliyahu" 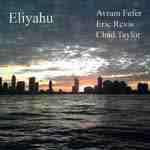 There's more than one way to structure a free date. Stick to a mode or tonality, of course, or have some changes involved that allow latitude, or build numbers around ostinatos, repeating riffs, and center the improvisations around that. There are lots of other ways too, but you get the idea. Avram Fefer's new trio recording Eliyahu (Not Two 854-2) uses foundational key center/scale-modalities and bass-centered ostinatos as organizing blocks for many of the numbers. First off, this comes out of African tradition (especially West African) and lends itself very well to a rootsy take on the music. Another point, and I suppose this is obvious, ideally the ostinato has to breathe, to open up a space both within and around it, so that drums can weave in and out of the implications, and, in this case, the tenor/alto can soar over, around and return to the riff idea alternatingly.

In a trio like this one, all that is not only not a problem, things take OFF. Drummer Chad Taylor is a big part of that. He swings with a limberness that gets everything weighed out right, and he plays a very musical set of drums. Eric Reves is there with his huge bass tone and punchy anchorage. His solos resonate too. Then Avram Fefer. Here is a player with a sound that manages to be his own, though it channels a kind of Trane-Rollins-Redman largeness--meaning that there's a classic quality to it. Then he has that growl, which is very cool and goes way back to some of the earlier masters like Big Ben W.

Beyond these nuts and bolts we finally clear the way for the music itself. Of the many sax trio recordings that come our way in any given year, a few are standouts. This is one of them. The trio is highly attuned to one another and everybody is taking off in the same space capsule, so to speak. It's a disk I would not hesitate to play for someone who wanted to hear what "very modern" or "avant" jazz sounded like. I'd play it because it is an advanced sort of thing yet it is so musically direct that it could (and should) reach listeners who would not otherwise respond to new music of this kind. Those already initiatated should also check this one out, because it hangs together wonderfully. Highly recommended.

Those of you in and around New York, don't forget that the Vision Fest runs this week, starting today I believe. It's the major jazz event in the Big Apple, for the new jazz anyway. Check it out!
Posted by Grego Applegate Edwards at 5:21 AM