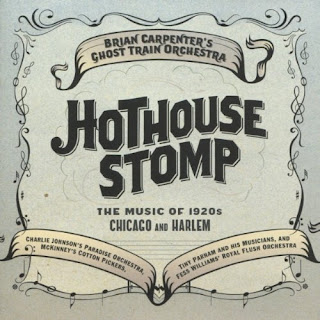 Early jazz was not a matter of three or four bands with monster soloists playing in a vacuum. Not every band had the over- powering playing of Armstrong, Oliver or Keppard gracing the front line. And jazz as it flowered was not merely a showcase for soloists. There was the hot two-beat swing, the arrangements, the fact that this was music for people to dig live, not some living museum of early style. That perhaps is obvious, but histories of jazz sometimes make you think it was ALL Louis's solos and the rest was just filler.

Another point: the early jazz recordings were just plain-old off much of the time. Balance was bad, fidelity was poor, drummers had to do ricky-tick temple block noodlings to keep the record cutting needle from jumping off the platter, recording engineers did not understand the music and worked against the sound, tuba players held back, etc. One has to use lots of imagination to feel the real power of this music as it was played live.

All this I hope serves to introduce a very welcome historical repertoire CD of the music of that time: Brian Carpenter's Ghost Train Orchestra and their Hothouse Stomp: The Music of 1920's Chicago and Harlem (Accurate 5062). It's a medium-sized group of musicians of today playing new arrangements of the music of McKinney's Cotton Pickers, Fess Williams, Charlie Johnson and Tiny Parnham.

It has the recording sound of today, of course, and the power of this music comes through with all the familiar-made-strange excitement of that style done well. The arrangements are a little quirky (bowed saw added, for example) but then this music WAS quirky at the time. The players do an excellent job getting into the period style without sounding at all sterile. Great job! I want more. I hope Brian continues with more of this because it is just what is needed to bring the period alive for us.

A somber side note: while searching for a cover image of Hothouse Stomp on a search engine we all know, I found listed up front what appeared to be a great many sources of unauthorized free downloads of this album. Shame on you guys and hey, engine folks, don't you get what that is about? (By the way must my site be lumped in the same basket as those sorts of pirate rogue blogs? Take a guess who will probably rank higher in the search results?) OK I can understand how limited access to long out-of-print obscure sorts of things that don't have much chance of re-release might be a good thing in the long run. But to take a brand new, original album and post it for unauthorized free downloading is to destroy the music, people. Don't do it!

Read my blogs if you care about the survival of music like I do and I'll keep writing. Thank you.
Posted by Grego Applegate Edwards at 6:53 AM