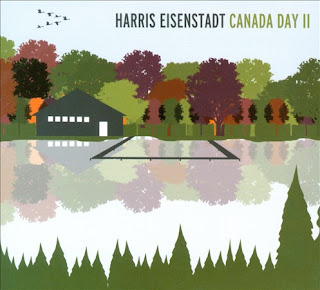 Drummers aren't usually jazz composers. It has to do with devoting a lifetime to the drums. It can take you away from the rest of the notes that are possible, horizontally and vertically. There have been exceptions. Denzil Best wrote or co-wrote a classic bop tune. Help me out here. I forget what it was. Tony Williams and Jack DeJohnette wrote some great music for their groups. Jack continues to do so. And there have been some more in later years. Chad Taylor. Others. The list could grow much longer but the point is that there are relatively few compared to other instrumentalists.

And there is Harris Eisenstadt. He plays and writes with his own view of how things can go. An orchestral work of his is being read this month by the American Composers Orchestra, a singular honor. And he has a new CD, Canada II (Songlines 1589-2). It's a terrifically balanced quintet of Harris on drums, Nate Wooley, trumpet, Matt Bauder, tenor, Chris Dingman on vibes, and Eivind Opsvik on bass. These are players of character and personality. Maestro Eisenstadt has written a series of pieces that bring out the sonority and quirkiness of such a line-up, at the same time as he has crafted a series of melodically distinguished lines. There are quasi-chorale forms, melodic lines that have a folky-street sort of simplicity for a second, only to veer sharply in contour and grab the ears. And he maps out other contours too, all in a style that is his--almost a modern day Tadd Dameron? He knows how to write-arrange for a relatively small group of this sort and get a large sound by sometimes having the horns sound close harmonies that beat together to project a more sonorous and large ambiance. And the vibes are given the loose-comp freedom that opens up plenty of implications for the soloists and gives the sonic whole a contentful but not-so-dense matrix.

This is serious quintet jazz that comes alive for the listener after several hearings. There is much to hear and appreciate on this one. Harris has consistently been at the cutting edge of jazz composer-bandleaders in the last couple of years. He shows on Canada Day II that he belongs there. Don't miss it!
Posted by Grego Applegate Edwards at 7:22 AM