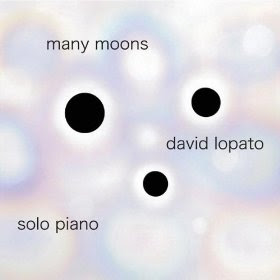 When you do a disk of solo piano improvisations, the spirits of Keith Jarrett and Cecil Taylor loom over your shoulder. They have been so influential that virtually all who have followed after have felt the pull of their respective magnetic zones.

David Lopato comes into the fray with Many Moons (Global Coolant 01) and perforce experiences the opposite tugs. His response is to try and keep to the center of influences by evoking jazz tradition, albeit expanded and loosened to fit a more free-wheeling excursion, and by tapping into the vast possibilities of avant garde pianism that preceded both artists and to some extent encompasses the two even now. So you'll hear some quasi-stride, quasi-boogie of a non-Jarrettish sort (see below), some boppish lines, loose balladry that owes as much to Evans as Jarrett, and some melodic jaggedness that, yes, has a little Cecil in there (but then early Keith did too). And you'll also hear post-Cagean prepared piano clanking and some Ives-Henry Cowell cacaphony.

The point here is not to play the influences game for its own sake. Everyone has been influenced by someone. Influences show you the strength of various artists legacies and so that is interesting in itself. But then the other point is to illuminate the artist at hand, to show how those influences are transformed (assuming they are of course).

And so David Lopato goes a middle way. He expands by adding to it what else that he has embraced musically. And in the end there is a distinctiveness. He's not quite as lyrical as Jarrett, more stoic, in a way. And he is not as turbulent as Taylor. Lopato uses expressiveness as part of his palette, but he is less the romantic. Expressiveness is not the end-all for him. So he turns to swinging lines out of bop, sound-color moments, some of the modern harmonics and melodics that are in the avant garde air, a little of the gospel-boogie Jarrettisms, but something more coming on too, as we've hinted at.

Lopato has his own way. The solo disk goes in many different directions as suits Mr. Lopato's inclinations. In the end you have an impressively musical presentation by a player who has something to say
Posted by Grego Applegate Edwards at 7:07 AM