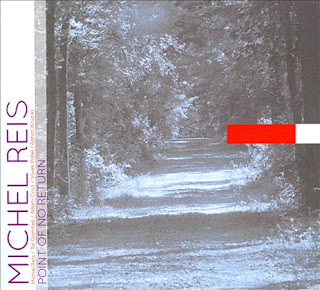 Musical artists often take exception to being pigeon- holed by the press and it in part has to do with their wish not to prejudice an audience in advance against their music in any way. Yet of course readers want to have some idea of what to expect from an artist and his or her music. Pigeonholing is one quick way to convey some sense of the music, just as bricks-and-morter record shops ordinarily divide what they are selling into various categories: rock, jazz, classical, etc.

The danger as I see it is in reification, to assume that because one has put a label on something, that somehow the music has been dealt with, explained. For an artist or ensemble in the throes of creating their music, these labels mean very little. Every musical event in this sense is a world unto itself, a center, a totality. And so it should be.

So if we look at pianist-composer Michel Reis's new Point of No Return (Armored Records 8011) we could say that he works in the advanced tonal realm, that the pianism in so great abundance on this album has some bearing on possible classical training, that the music is highly developed compositionally, sometimes almost through-composed, that the ensemble quintet of piano-bass-drums-fluegel-soprano sax seems often a kind of block extension of Mr. Reis's pianistic conception. All these things, to my mind, are part of the music as I hear it. That the soloing, especially from Mr. Reis, is quite imaginative is something again.

But if I then went on and charted out a mental map of "jazz pianists" and where Reis belongs on that map, at least if I were to do it in a sort of glib, shorthand way to categorize or even dismiss the music, I would not be doing a great service to the artist. We all tend to do it anyway at some point. But should we?

The point: every artist is his or her own center. We should seek to understand that artist as much as possible in the fullness of what makes him or her what he or she is, what makes the music different. That may be a quagmire. But there are qualitative and other aspects. One thing is sure, on a qualitative level, Point of No Return operates on a high level. That does not mean that the music is better or worse for belonging at a particular place in a continuum of stylistic possibilities available today. Those are judgments that I think are probably best not made for the sake of the artists and for the sake of the music.

One thing is sure: Michel Reis is an artist of talent. This one is highly recommended.
Posted by Grego Applegate Edwards at 5:16 AM