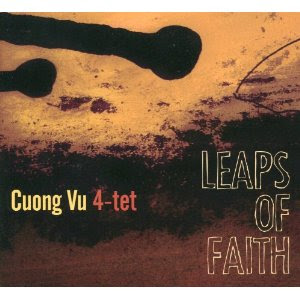 Cuong Vu has reaped the benefits of a change in place since he moved to Seattle. At least so it seems from the evidence of yesterday's CD (see below) and now another today. This one is his 4-tet, Cuong on trumpet, two electric bassists--Stomu Takeishi and Luke Bergman--and Ted Poor on drums. The CD is titled Leaps of Faith (Origin 82585) and it's a very creative thing going on there. They use delay effects and lots of space. They take a wide open stance, with a bare tempo elaborated by Ted Poor, for example, some room for bass architecture, then envelopes of sound from Cuong and the basses, all geared toward (mostly) realizing very unusual versions of standards. It's electric, it has lots of room for Cuong Vu's considerable trumpet improvisational flare.

Electric Miles is somewhere around the last bend, lending his spiritual guidance. But they are trampling through the brush beyond him to create their own path. The two-bass idea works perfectly with both bottom and rich color possibilities realized with a flair.

It's a stunning album. Cuong Vu never sounded better. And it has a very individual approach. Nice!
Posted by Grego Applegate Edwards at 6:32 AM