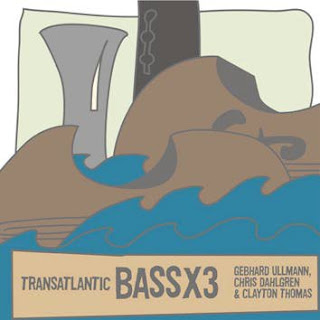 Gebhard Ullmann has been making a name for himself over the last decade in various contexts, most notably as co-leader of a quartet with trombonist Steve Swell.

BassX3 is a most unusual proposition of reeds and two basses--Ullmann on bass clarinet and bass flute, and the contrabasses of Chris Dahlgreen and Clayton Thomas. Their second recorded effort, Transatlantic (Leo 625) finds them exploring freely the kinds of unusual timbral color combinations and group sounds attainable through imagination and inspired improvisation.

Only one piece has freely walking basses and "jazz-oriented" bass clarinet soloing. But there are moments of fire-energy typical of "free jazz" at its most outgoing. The rest make use of the contrast between reeds and the low and complex sounds two basses can produce via arco and sometimes relatively unconventional playing techniques. Throughout this contrast forms a basis for the music that comes about.

The end result is an improvised new music that fascinates and brings new sounds into your listening world with forethought and a dramatic sense.

Posted by Grego Applegate Edwards at 9:29 AM