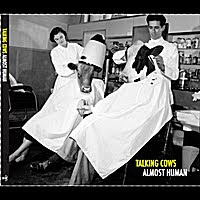 Talking Cows are into something very good. They start out from Mingus and Dolphy's sort of angular line-driven out-bop combined with some of the irreverance of ICP and build something their own on the influences. At least that's what I hear. Their album Almost Human (Morvin 9) gives you ten reasons why that's a good thing. Ten provocatively fetching originals by the Dutch quartet are contained within the blips and bloops of the CD format.

And the players are onto what they do in nice ways. Who are they? Frans Vermeerssen and Robert Vermeulen, on tenor and piano, function as George Adams and Don Pullen, though they don't especially sound like them. They go in and out of the changes/harmonic implications of the tune in creative and lucid ways. I am especially impressed with Frans's tenor work. Then there's Dion Nijland and Yonga Sun on bass and drums. They create the appropriately loose pulse, the nicely walking and tumbling pulsations.

It's the combination of crisply characteristic compositions and real-deal soloing that makes this disk a real winner. I like it more every time I hear it. It's a keeper!
Posted by Grego Applegate Edwards at 5:04 AM