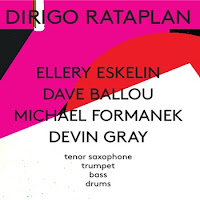 In just a day it will be April 10th, time for the debut album by Devin Gray to be released. It is going under the title Dirigo Rataplan (Skirl), which roughly means as I understand it "lead beating of the drums," or more understandably "leading from the drum chair." Since that is what Devin does here, it is apposite, it works. Mr. Gray plays some hip, driving, leveraged drums on this album. He leads a very hip quartet and has provided them with some nice compositions to boot.

Gray is 28 (I can remember that!) and so relatively young, but he chose some more weathered, less cherubic colleagues for this foursome. They were excellent choices both on paper and in their sound utterences. It's the intelligent bass-wielding of Michael Formanek, Dave Ballou on trumpet, a wizard of sound and line, and the beautifully personal tenor heft of Ellery Eskelin.

They have a kind of free-strutting quality to what they do here. There's a linearity that is made more driving, complex and free by the all-over quality of Devin Gray's time keeping. It gives the players impetus to loosen up and give their best.

And that makes for a wonderful disk. As a Bullwinkle J. Moose Cheerio ad from my youth had it, "go, go, go. . . but watch where you are going!" And so this quartet goes freely but not so much willy nilly. They know where to go and they go there.

Get set for some ravishing improvisational adventures. You'll get plenty of them on Gray's impressive debut. (And I will NOT comment on the graphic design of the cover, since, as the song has it, "a duck may be somebody's mother.")
Posted by Grego Applegate Edwards at 5:22 AM