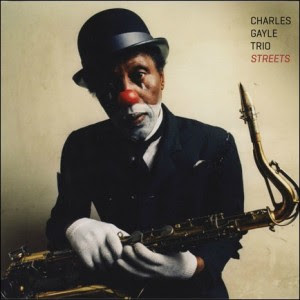 What is Charles Gayle doing dressed as a clown on the cover of his new trio recording Streets (Northern-Spy 018)? The answer is that it is a character persona Charles donned in the '90s to comment on his days of homelessness.

Charles Gayle has been recorded pretty extensively since his breakthrough days as a "pure" avant-free jazz saxophone voice. He has been rather well documented. So what would induce you to shell out your money for another release? The answer is that he has developed his voice and sound on tenor to a point where it is quite obvious he has undergone a period of growth. The album is of a piece; Charles on tenor, Larry Roland on acoustic bass, Michael TA Thompson on drums, playing an hour of free excursions. But it's not just any old hour. Charles is magnificently limber, impassioned and fired up. Roland and Thompson give him the cushion of excellent free-styling.

It's a complete statement of the place where Charles Gayle is at today. A master of expressive freedom. If you want to know Charles Gayle at his full power, this gives it to you in all its glory.
Posted by Grego Applegate Edwards at 4:43 AM