Harry Allen, Rhythm on the River 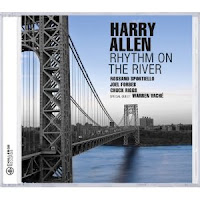 On the current jazz scene all past styles co-exist with the radically new. It's a pluralistic world where artists may feel free to explore the styles that they find the most stimulating and suitable for their musical personalities, wherever that may lead.

So we have Harry Allen and his new disk Rhythm on the River (Challenge 73311). It's a sort of pre-swing/swing oriented date with some players well suited to the mode employed. Harry plays a tenor that reflects the note-choice wisdom of some of the early masters, like Hawkins, Webster and that general stylistic complex. With the heat there's a bit of "cool" in there that doesn't quite suggest Lester as much as later Ben. He's picked some winning partners in Rossano Sportiello on piano, Warren Vache on cornet (for around half the album) and a rhythm team of Joel Forbes and Chuck Riggs, bass and drums.

All the songs have the river as theme. They are generally some old classics and they serve the players well. And there is some fine soloing from the horns and Rossano W.

All in all a nice revivalist session that gets it right.
Posted by Grego Applegate Edwards at 5:13 AM