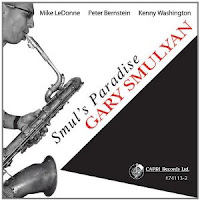 According to Neil Tesser's fine liner notes, baritonist Gary Smulyan's Smul's Paradise (Capri 74113-2) is a kind of tribute to the original sound and style of the not well-remembered organist Don Patterson, especially as heard in those marvelous Prestige albums from the '60s. I only read things like liner notes, press sheets, etc., after I have formed my own judgement on an album. And there was something lurking at the back of my mind about this one that percolated underneath and did not come to the surface until I read the notes. "Aha," I said to myself, "that's what was poking at me as I listened to this." Don Patterson is a favorite of mine and it was that vibe I was picking up on without naming it in my mind.

The hard bop, hard swinging funk of Lonnie Smith, Don Patterson and early Larry Young is the fulcrum point for this one. Mike LeDonne on the Hammond, Peter Bernstein, guitar, and Kenny Washington's swinging drums give Gary the context for Gary to hold forth on his baritone. The music includes a couple of Patterson-penned burners, the perennial "Sunny," and a couple of game Smulyan originals.

It's a great band to do this and they pull it off with their own stylistic integrity intact. Meaning they are not just copping a style. They are co-opting it and making it what they will of it. Everybody sounds great and the music SWINGS, brothers and sisters. It's hands down one of the best and most convincing organ jazz revival disks I've heard in years. And Smulyan gets a showcase where he can nail it. Nail it he does.
Posted by Grego Applegate Edwards at 4:55 AM