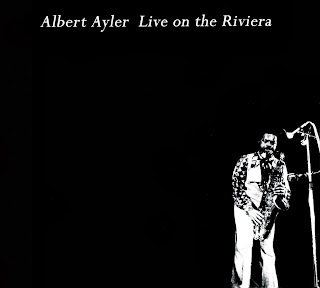 This Monday marks the 43rd anniversary of the death of Albert Ayler. He lives on in his recordings and his wide influence out there. Those who follow the all-too-short career of the saxophone titan, in terms of the chronology of the disks, have no doubt felt like I do, that there are really three periods represented. The first was before he had fully broken free from bop form. In those early recordings he has a bit of a Sonny Rollins in there among other things. Then there are the seminal recordings, the free, new thing Albert at his best. Following that, cut short by his tragic death, was a period of experimentation with rock and soul and the music he made with Mary Maria and Albert vocalizing.

It was the final phase that microphones caught live at the Maeght Foundation in St. Paul de Vence, July, 1970. As part of ESP disk's 50th anniversary that session, Live on the Riviera (ESP 4001), has been reissued. (I gather that it came out originally in the early years of the new Millennium?)

Albert fronts a quartet for this date that includes a ready-to-rumble rhythm team of Steve Tintweiss on double bass and Allen Blairman on drums. Then Mary Maria is front and center as vocalist and also plays a little soprano. Albert lets loose on tenor, soprano, musette and vocals.

The date was recorded just months before Ayler left our world. He died November 25th, This concert was on the previous July 25th. We get in clear sound the quartet going to it. Mary Maria is I suppose an acquired taste. When much younger I honestly didn't know what to make of her. Albert as a vocalist falls into the same category. But once you get on their wave length, here as much as on the commercially released albums, you can then get more with what the whole band is up to.

This was Albert still playing free but with vocals to break it all up. "Music is the Healing Force of the Universe" is the more profound of the Mary Maria vocals; she mostly intones the words here as opposed to the more vocal version on the album release.

The vocals are not otherwise a surprise over and above the LP versions. But the band and Albert himself are in an up mood. Listening to Ayler's tenor here is central to the experience. His tone had gotten at times very gravelly, almost like a bar-walking version of Rollins but no, it's more Ayler than not. He may be a little less ready to completely go out there on this night, it's true. What he plays though, we who revere his music appreciate. And the band is on top of it--free-timing their way to a good zone.

This may not be a perfect concert. It is manna though for Ayler enthusiasts like me.