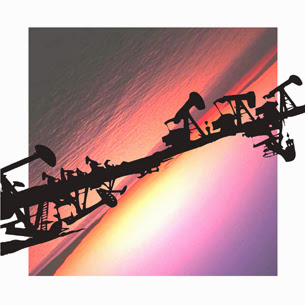 Orchestrated Improvised Lives, or O.I.L. (Improvising Beings 21) is the duo of Noah Rosen at the piano and Alan Silva on the orchestral synthesizer keys. They recorded some free improvisations live in Paris in 2011-2012. The album at hand contains those spontaneous moments for us to relive and appreciate.

What is striking about the music, thanks especially to Maestro Silva's way with the synthesizer he plays, is the nearly orchestral texture of the sound. It is almost as if you are hearing a free concerto for piano and "orchestra", which in many ways it is, except of course the "orchestra" is as concerted as the piano.

What is refreshing about it all is the open form of the music. Neither player is looking to recreate the sound and style of some previous free musics we have grown to know and love. So in fact one needs to clear the aural memory of whatever it is one might expect to hear and then let the music wash over your senses.

Noah Rosen calls upon his own sensibilities to create well-executed music that owes something to the jazz tradition as much as it references advanced and sometimes rhapsodic new music realms. Alan Silva brings a great deal of color to the music, choosing his notes but also his sounds carefully to build mode and depth.

Together they make a deliberately independant statement as to what free improvisation can be. And what that is comes across to the open-eared listener as MUSIC without the need for parcelling it off as "this" or "that". It is both. It is neither. It is music that projects outward as creative freedom. And that is good.