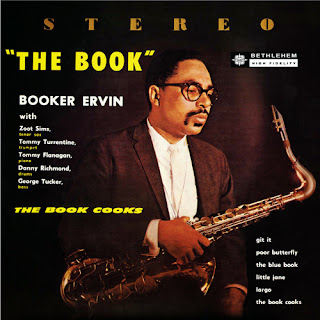 There are jazz luminaries in the rich history of the music who for whatever reason never quite entered the pantheon of immortals (wherever that may be located) but made some excellent music that still bears hearing. Such an artist is Booker Ervin. A tenor sax man with great fire and power, he came to fame as a member of Charlie Mingus group from 1958-1960 and made a career of it with his own groups, gigging and recording a good number of albums under his own name in the later '50s through the sixties.

One of the best also happens to be one of the first, The Book Cooks (Bethlehem 6048), which originally came out sometime around 1960 or so and has been reissued on CD in the Bethlehem redux program which is underway (and quite welcome, I might ad).

It bears the distinct mark of Mingus in the material, mostly written by Booker. That is understandable and quite appropriate, since Booker was coming off a two-year stint with the master. Mingus's drummer Danny Richmond is on the date with his always churning, swinging fire. George Tucker sounds great on bass, a player who did not always get the recognition he deserved. He is recorded well here. You can hear his wonderfully woody tone and note choice clearly and in tandem with Richmond the stage is set for some supercharged blowing. Tommy Turrentine sounds good on trumpet, Tommy Flanagan masterfully bops his way through on piano, and then in a bit of a surprise Zoot Sims locks horns part of the time with Booker--with some hip two-tenor battles. Zoot is playing great but it's Booker who comes out on top in the end. He was simply on it that day.

And that fits, because this is Maestro Ervin at his strongest. This is the sort of hard bop that was Mingus's strong suite then, and Booker is well in his comfort zone. You hear that plaintive cry that was his trademark, but only as a part of an inventive arsenal of late bop facility, a sheets-Trane hardness and adventurous noteyness, all in line with the way Booker could get something going strong then.

And so I would recommend this one if you don't know Booker well. There are some excellent slightly later ones but this one still sounds convincing and vital. So it makes a great start to your Ervin collection. At this point in his career he was taking the town by storm.

Posted by Grego Applegate Edwards at 6:53 AM