Keefe Jackson's Likely So, A Round Goal 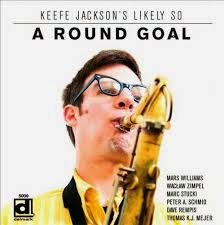 Chicago reedman Keefe Jackson and his all-reed group Likely So score a big one on A Round Goal (Delmark 5009). Seven reedists in the avant jazz realm join forces for a set of all-Jackson compositions, recorded live earlier this year at the Jazzwerkstatt Festival in Berne, Switzerland.

This is music that builds on the reed ensembles of the World Sax Quartet, the Rova Sax Quartet and some of the things Roscoe Mitchell did on Nonaah. Dave Rempis, long-time Jackson associate, is here along with other game cats.

The idea Keefe Jackson had was to get some compositions together that left plenty of room for improvisation and group interaction.

It's fire-y free-flowing jazz in the new Chicago mould that builds out of the brilliance of AACM artists and adds to it. You must play it a few times before it all comes together in your head/ears. But then...look out! Seriously.