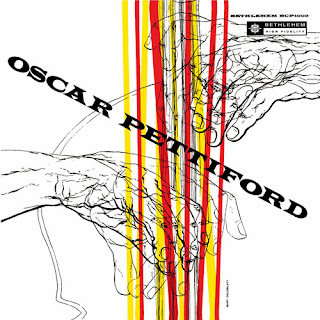 In the '50s there was no finer jazz bassist than Oscar Pettiford. Sure, Mingus was right up there with him, and Paul Chambers a close second. Scott LaFaro and Charlie Haden gave listeners much to think about at the end of that period but in the end belonged more to the next decade so far as impact goes. And none of them played cello like Oscar.

One of Oscar's first solo LP recordings came about in late 1955. It was what was dubbed and titled the Oscar Pettiford Modern Quintet (Bethlehem 1003) and released shortly thereafter as a ten-inch LP. For the Bethlehem reissue series under way it is now available on CD. Those were the days where often less was more. So we get six numbers in 15 minutes. There isn't a wasted moment though.

In the band is Oscar on bass and cello (the latter overdubbed when necessary), a young Charlie Rouse on tenor, Julius Watkins on French horn, bop vet Duke Jordan on piano and Ron Jefferson on drums. Half the numbers are Pettiford's, including "Trictatism", which ought to be more performed today because it is classic. Then there's one by Gerry Mulligen, one by Quincy Jones and a standard.

It's a very potent outfit that bops and swings just fine, but in its arranged-composed quality has something in common with Miles' seminal Birth of the Cool. Pettiford solos on bass and cello in ways you would expect, namely with a real brilliance, and he walks with authority. Rouse sounds great. The ensemble is an unusual sounding one with the addition of Watkins and his definitive take on jazz French horn in those days. His solos have conviction. Then Duke Jordan is right there too with a post-Bud-Powell bop horn-like-right-hand in his solos. So all is most definitely well on the personnel front and the numbers are very hip.

It's pure pleasure if you dig where bop was mid-decade. And it's pure Oscar, too. To me it's 15 minutes of music that makes me smile. What could be better?