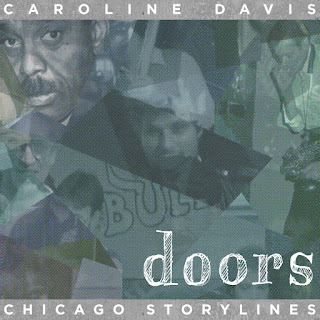 Chicago-associated alto Caroline Davis gives us her second album, Doors: Chicago Storyline (eyes & ears ee:15-o39). It alternates Caroline's advanced jazz compositions as played by her regular band with spoken dialogs from local musicians on the Chicago jazz scene from the '80s to the present day, roughly.

The dialogs tell the story of the clubs, the players, the ups and downs. The music gives us modern new mainstream jazz of a worthy sort. Caroline is joined by Mike Allemana on guitar, Matt Ferguson, bass, Jeremy Cunningham on drums, plus guest Russ Johnson on trumpet for most of the album, and cameo appearances by Ron Perrillo on piano and Katinka Kleijn on cello.

Caroline has a rather lush, darkish tone and well-executed, very good ideas on alto. The band is very much a together thing thanks to what I take is a lengthy collaboration. Strong soloing is going on throughout and the compositions are memorable.

The dialogs have a real sense of history and anecdotal we-were-there authenticity.

And the music is first-rate, top-notch, a testament to Caroline's strong musicianship and the cohesive talents of her band. At times the compositions have an almost Dukish-Strayhornesque classicism. Other times they sound hip and contemporary.

I missed her first album but this second finds me enthusiastic. She is someone to hear, surely, and this is a fine way to get introduced. Good music and another excellent example of the Chicago scene! Recommended.