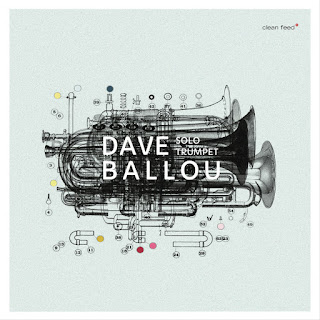 How you react to a solo wind recording in the new jazz improvisational sweep is nearly unlimited. Some find it all annoying, some are automatically enthusiastic, and the rest are indifferent. The latter reaction is probably the most sensible. After all, it is all about the hearing. What happens? Dave Ballou gives us a full CD of improvisational soliloquies on Solo Trumpet (Clean Feed 349).

His background and abilities somewhat uniquely situate him as an unaccompanied artist of interest. He is a composer and a trumpet master who has been involved both in contemporary "classical" camps, performing new music by Gunther Schuller and Larry Austin, and he has been an important part of the jazz-spectrum via ensemble presences with Maria Schneider, Joe Lovano, Andrew Hill, Oliver Lake and the like. Now of course all that does not necessarily tell you that a solo trumpet outing would necessarily be interesting, or that any number of other possible backgrounds would not also make up an artist who could generate interest alone.

But in fact this is something to get and keep your attention. Ballou has a wide range of conventional and less-conventional techniques he puts into play for a ten-segment program that puts a series of coherent solo events into our listening space.

There are affective and structural zones that Dave evokes in his expressive playing. You can hear both jazz roots and the spectrum of contemporary sounds at play throughout the course of the program. Whether "straight horn" melodic spinning or speech-phrase trumpet soundings, growls or wide-ranging creative note-weaving that combine any number of these elements, Ballou comes through with a musicality that may take you several listens to appreciate, but then you get it.

No one is likely to set the world on fire with a set of unaccompanied trumpet outings. This does not do that, yet it satisfies in its singular directness, its unpretentious expressivity, its imaginative thrust.

It's a real addition to the solo brass jazz avant recitals to be had out there. It makes you want to hear him with his own group, too. So you may well want to check this one out.