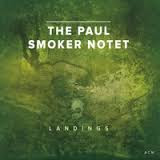 Paul Smoker is an artist I have appreciated over the years but mostly due to the serendipity of chance not so much as a band leader, meaning that I have enjoyed some of that at friends's get-togethers and over the radio, and I have reviewed a number of fine albums where he is in a cooperative setting, but I have never had the opportunity to hear one of his recordings as a leader in depth until now.

Through the kindness of Phil Haynes, drummer of abundant talent and all-around good fellow, I have been communing with the 2012 album by the Paul Smoker Notet, Landings (Alvas Records 2105). It is a collection of ten Smoker originals and one standard as performed and interpreted by Smoker on trumpet, Drew Gress on bass, Phil Haynes on drums and Steve Salerno on guitar.

The band is highly focused and absorbed with reacting to one another and with the compositional structures in great ways. The written parts set the mood in each case and allow each member of the Notet to create worlds within worlds, the sum total of which is striking.

There are ostinatos, melodic flourishes and sophisticated music of an advanced avant sort to be heard in abundance. The band takes it all in stride, with a looseness that is not so much casual as open-ended. Thanks to that quality we get four-way movement that gives us a personal stamp of each artist. Paul is limber and subtle, original and fully sound-fingerprinted as himself wholly. Drew has a very musical role to fill which whether arco or pizzicato is always impeccably grounded in bass presence and creative flow. Phil has an open role as percussive colorist as much as rhythmic implicator and he comes through with some phenomenal playing. Steve's guitar acts as a worthy front-line instrument for the compositional material. He solos with a full range of stylistic implications, from electric to woody-classic and back again with intelligence and soul, and full musicality.

The arrangements vary the interactions and roles each play in ways that keep you listening with an eagerness born of the four-way artistry and what they do on this set.

The music stays in the head as primo avant-contemporary jazz played by a state-of-the-art quartet. It is music to fill you with warmth, lyrical yet hard-hitting torque and finesse. It is a peach of a set that you should grab without fear. It is a winner!