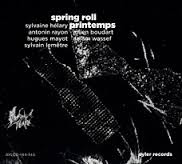 What is worth hearing remains so in time. I am late in covering the album at hand, which appeared last summer. It is no less interesting as I write this in the thick of winter.

This is new music composition and improvisation, straddling the avant jazz realm while also stressing the pre-improvised possibilities inherent in the ensemble. Each disk encapsulates an interrelated set of numbers that coheres as a whole. "Printemps" uses the spoken sound expressions of Julien Boudard, Xavier Papais and Aalam Wassef (an Egyptian blogger) along with the music of the quartet to give us an impression of the "Arab Summer," a movement filled with promise and hope for the participants. If you do not know French very well the words may remain as abstractions in the mix, but the music has such vitality and originality that it does not deter.

"Spring Roll" is an all-instrumental suite that continues the theme of freedom.

Both are filled with meaningful collective and individual soloing and compositional strengths. There is a continual directionality to all of it, a decisive stance on where the music should go. Sylvaine Henry apparently is responsible for the compositional elements, and they are impressively advanced and fluidly effective.

It is music that must be heard to appreciate. The quartet rises to the occasion with fully worked-out ensemble performances, both of the written and the improvised sections.

It may perhaps be a bit of a sleeper...until you give it a close listen. At that point you unexpectedly come to grips with a richly intricate and genuinely original jazz-new music intersection, one of the more important such releases of last year to my ears!

Get this one if you can and listen well. It's great and Ayler Records deserves your support!