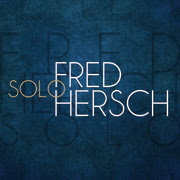 Surely one of the supreme litmus tests for an accomplished jazz pianists is in the unaccompanied solo realm. Not every great jazz pianist in the history of the music did much of it, Bud Powell for example, but these days many if not most of the best pianists give us some solo offerings.

Fred Hersch qualifies as one of the very best today and it is well for us that he does delve into the unaccompanied space where it is only the artist, the instrument and the creative, inventive abilities that hold sway. To celebrate his 60th year on earth he gives us an especially attractive and beautiful volume of such things, simply entitled Fred Hersch Solo (Palmetto 2180).

It was recorded live at a small wooden church for The Windham Chamber Music Festival in 2014. In fact it is his 10th solo album, I read. It sounds fabulous. It captures the master artist in a specially inspired mood and he himself believes it may well be his best.

His pianistic sense most certainly is untouchable. The piano sings. The lines and harmonic sensitivity are acute, alive.

Standards form the bulk of the musical subjects, "Caravan," "The Song is You," "In Walked Bud," Joni Mitchell's "Both Sides Now," all get very considered treatment, the sort of deep subtlety that only a piano "genius" can provide, and there is much that spells out his brilliant originality in the process.

There are a couple of originals too, one for Robert Schumann, one for Suzanne Farrell, and both speak to us eloquently.

There is a continuous flow of ideas, of striking ways to articulate the implications of the song vehicles.

Fred Hersch is a national treasure by now. He has emerged from a near-death health crisis to gain a new depth and strength. This solo recital must be heard. He is a titan!