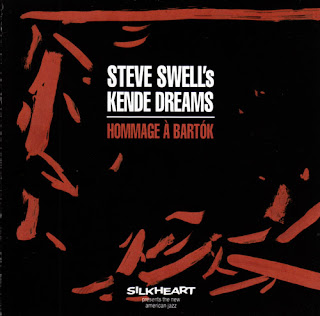 Some projects come about in ways that have an important impact on the final result. Take today's album by Steve Swell's Kende Dreams, Hommage a Bartok (Silkheart 160). It all started when Lars-Olaf Gustavsson, producer and director of Silkheart Records, encountered Steve Swell during the Vision Festival in 2014. Lars-Olaf brought up the possibility of doing a kind of Bela Bartok tribute album (as most will know, an important modern composer from Hungary in the last century). Steve jumped at the chance and Lars-Olaf suggested some of his favorite Bartok works that Steve might use as a springboard, including Bartok's "Microcosmos" piano works and the String Quartets. An excellent set of choices, there. Lee Konitz did some arrangements, fairly literal, of three "Mikrokosmos" pieces for his album Peacemeal many years ago, so there was a nice precedent.

But precedent does not equal duplication, for Steve's approach is a good deal more oblique. Anyone who knows Steve's creative presence on the new jazz scene would not expect anything not ultra-creative. And that's what we get. Steve immersed himself in the works, did some research on the history of Bartok's Hungarian homeland, and discovered in the first years of the local federation of groups that later became the Hungarian nation per se, very long ago, that as various Magyar tribes gathered together they divided their governing bodies into the military and the spiritual, the latter known as Kende. In time the military powers predominated and the Kende were in effect disenfranchised. As Steve states in the liners, this seemed to him an example of how humanity in general can get off the track of what constitutes their essence, of what makes them unique and generative beings, the Kende realm. We know this directly in our time, as the endless wars continue and it seems increasingly to be at the expense of what nourishes our inner beings. Music of course is a vital part of that. It is for this reason that Steve calls his project band Kende Dreams.

At any rate Steve dove into a Bartokian preoccupation, listening and examining the music closely. In the end Swell fashioned seven compositions that were informed and inspired by Bartok, that were faithful to the composer's musical outlook and intent, but were not by any means a literal re-arrangement of Bartok's music.

Steve assembled a quintet that consisted of some of his very favorite musicians. It so happens that they are also some of the very best of the best in the new jazz. After several rehearsals they went into the studio with Lars-Olaf Gustavvson heading the production.

The results are available as Hommage a Bartok. The sextet, collectively and individually, sound as wonderful on this album as they ever have. William Parker on bass is a magnetic dynamo of power, playing his role as only he can do. There is great soul and intelligence to everything he does, whether it is a matter of sounding the compositional ostinato riffs and other pre-prepared lines, driving the music forward with dramatic force, or soloing with great ideas, he is central to how this music is made to come alive.

Drummer Chad Taylor makes for an ideal rhythm teammate in the way he works with William and catapults the band forward with drumming that exemplifies smarts, feeling and subtle drive.

Connie Crothers is exceptionally inspired with some of her breathtaking best on piano. As an ensemble member she opens up the music rhythmically and harmonically and in her solo spots she literally stops the clock with some fabulous statements that fit in totally with the modernist hommage yet are very much personal, very much Connie in all her most concentratedly intense glory.

Rob Brown on alto is ever directionally himself, which means he can quickly get to the core of a solo statement and work inside and outside thematic elements of the music at hand for some of the most challengingly great performances on new jazz alto today.

And then of course Steve Swell on trombone. Clearly the compositional intricacies and the intense beauty of his bandmate's involvement inspire him to some of the best trombone soloing out there. Not a note is wasted, there is nothing inessential, all is most surely Kende.

The seven compositions are wonders of concision and advanced modern movement in ways very true to what Bartok stands for. It is hommage not so much by rote re-presentation, but rather by sympathetic parallel-drawing, by fashioning an analog in the new jazz mode of what he was in the classical mode. So it is all about the intricate line drawing and part interlocking, the harmonically edgy, the linear consciousness of newness, and all acting as superb springboards for the sextet in full bloom.

These may be some of Steve's favorite musical friends, but they are the collective listener's boon aural companions as well. They are players of infinite talent, of the present-day refusal of Kende to be silenced, of Kende to triumph with music of total commitment, of the flourishing of the creative spirit against all odds. It is music like this that will push the world forward into a new age of humanity as their best collective selves. Not violent, viable, violets in fresh and striking bloom, vibrations of the human soul at its best. That is what the music is for me.

Needless to say, this is music of a startling excellence, something to play for anyone who asks, "so what is great about the contemporary scene?" This is. An album to be reckoned with, a wondrous tribute to Bartok and a tribute to the exceptional musicality of Steve Swell and this formidable sextet.

Get this one if you only buy ONE album this year. Can I make any stronger case here? That is my happy feeling and I surely suspect it will be yours.