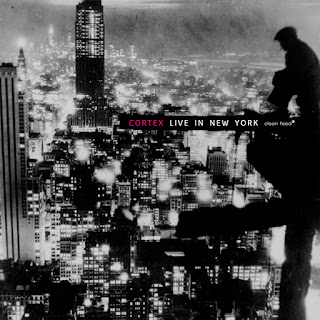 Some albums hit from the moment you hit "play" and never let off. I found that happily true of Cortex and their Live in New York (Clean Feed 381). These are not players I know well. At least not until now.

It's Thomas Johansson on trumpet, Kristoffer Alberts on saxes, Ola Hoyer on double bass, and Gard Nilssen on drums. Not New Yorkers per se but recorded live here at IBeam in Brooklyn last year. And they were most surely "on it!"

They have an irresistible swing going on and a pronounced old-new thing influence as they burn their way through two short and one longer Johansson tune. "Burn" is the watchword because they really do. Both Johansson and Alberts get a froth of energy and soul freedom going which is backed up by the flaming rhythm section that riffs and swingingly charges forth. Classic Ornette, the NY Contemporary Five and early Sonny Simmons come to mind as precursors to this music--in the best indirect sort of way because Cortex takes it all to their own present-day place.

This is a scorcher! It clocks in as an LP in length but that feels just right. Big recommendation!
Posted by Grego Applegate Edwards at 6:15 AM