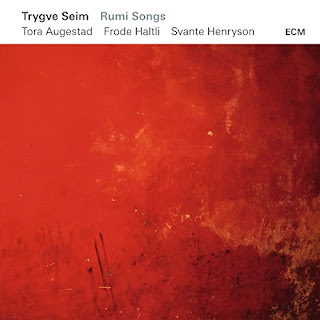 When one is on the receiving end of all the newness out there as I am in my reviewer-blogger capacity, one can never be sure what one will be exposed to next. Trygve Seim's Rumi Songs (ECM 2449) is one of those where I had no idea what to expect, and was happily shocked by the old-in-the-new, the lyrical-in-the-deep sort of music to be heard here.

Seim plays tenor and soprano sax in the way that ice on a small pond may build up over time. It is all of a piece as that sheet of ice, yet there is an ever-varying way it hangs together from section-to-section, piece-to-piece. Certainly Garbarek's imprint is upon what he does, but he transforms it all.

The program is a series of songs Seim composed out of the poetry of Jelaluddin Rumi in the English translations of Coleman Banks and Kabir Helminski. Now this is deep imagination at work to begin with. Seim sets them to music--his own saxophones, the accordion of Frode Haltli, the cello of Svante Henryson, and the stunning vibratoless mezzo-soprano voice of Tora Augestad.

There are tightly composed lieder where the sequence and arrangement give musical life to the poetry; and there are others where there is a looser structure that allows for improvisation. As a listener one suspends expectations and lets music and meaning wash over one's senses.

The unique ensemble sound in the hands of Seim, his appropriation of Indian, Arabic and perhaps Euro folk elements give depth and musical voice to the imagery of the poems.

I find the music haunting, not easily forgotten, ever opening like the paper-flower sculptures as a kid I mused over. There is more. And then more. And unlike the paper structures you can unfold the aural world repeatedly.

It is music that puts you somewhere you do not expect to be but are glad of it. This is the new ECM I suppose you could say, or a part of it, expanding the open and ambiant creativity the label has always espoused but giving us things with a further sense of depth, a sonance that transcends categorization.

Beautiful.
Posted by Grego Applegate Edwards at 5:57 AM