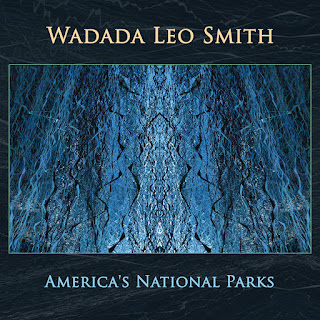 Wadada Leo Smith embodies perfectly the adage "older and wiser." In the past decade or so his music has attained a kind of Zen perfection of balance, between the written and the improvised, between his trumpet and the band, between sound and silence, between soul and space.

The new one, America's National Parks (Cuneiform Rune 430-431), gives us two disks of thematically related pieces dedicated to the remarkable sites in the US and to celebrate Wadada's birthday number 75, which falls this December.

The integration of master improvisers and striking compositional structures is complete, directional in the most comprehensive and significant sense. Wadada on trumpet, Anthony Davis on piano, Addey Walters on cello, John Lindberg on bass and Pheeroen akLaf on drums are ideal proponents of the composed totality of this suite, but they also take on the improvisational spaces as the best Jazz ensembles have done, seemlessly yet with total personal presence. Like the Hot Five, Ellington's best units, Miles Davis's quintets there is an uncanny meld of individual and group. If Gunther Schuller's vision of Third Stream music was never quite realized in the '50s-'60s, the New Stream music of Wadada brings his own organic intersection of composed and improvised into play in ways that more than fulfill the promise of new music-avant jazz, because every note and the sum total of the music work together as one. It is Wadada music, long beyond the dual label of our past aspirations. Total and without flaw.

I cannot think of another artist today who has achieved such a level of art music without sacrificing the immediacy of improvisation. But all of this is made possible after years of AACM glories, many bright moments by the very best of the new jazz artists, and we must not and do not fail to appreciate all the greatness that precedes this wondrous phase.

But listen to this music and much of what Wadada has been doing lately. It has risen above what has been to be what is now! Like the Parks, Wadada Leo Smith has become a kind of national treasure. And America's National Parks is one of the pinnacles of his art.

No one with a serious interest in new music should miss this. The top of the peak is in site, or is already before us. It is here. Now.
Posted by Grego Applegate Edwards at 6:02 AM