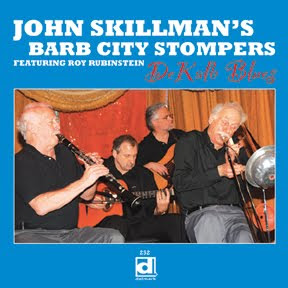 There was a time (mostly before I was born) when old-time classic jazz of the New Orleans-Chicago-Dixieland sort was flourishing and had a loyal, almost rabid following. In those days there were many bands, some very good, that carried on in the earlier tradition. Where we stand in the second decade of the millennium, things are far different. Not very many bands. All the original fans and the first generation of early jazz musicians are gone. That does not mean that good music in the tradition cannot be found, or that the music will not appeal to those who give it a good listen.

John Skillman's Barb City Stompers and their new release De Kalb Blues (Delmark 252) is a beautiful case in point. John Skillman is a clarinetist that takes the tradition from Johnny Dodds, Buster Bailey, Jimmy Noone, Peanuts Hucko and Edmund Hall and goes someplace with it. Trombonist Roy Rubenstein plies his instrument in the soulful gutbucket style, growls and wahs most definitely included. The rest of the band is sympathetic in setting up the swinging. good time feeling this music must have.

Skillman is keeping the tradition alive. The band does not sound like a living museum though. They all FEEL it and that's what makes them terrific to hear! Hurrah for that.
Posted by Grego Applegate Edwards at 4:50 AM